We took the direct Air India flight to Singapore. It leaves at a comfortable time and wasn’t too early in the morning. That is a big blessing since most other flights going abroad are at odd hours.

The flight was rather peaceful. The crew were sweet and greeted us with ‘Happy Holi’ messages. They were a smiling lot, always willing to help. The food was delicious. The last international flight I went on I was teeribky disappointed because they didn’t offer us a good vegetarian meal despite booking it in advance. This time they’d given us a choice of three juices – Apple, Orange or Tomato. I chose Orange. And the platter was a good mix with rice, dal and a tomato-garlic curry. It was piping hot and that made it even more palatable. There was a bun, sundal and a special sweet for holi too. Though I couldn’t eat the last three since I was too full after the rice. Still regretting leaving the sweet on the plate.

The flight had good leg room space. So it was comfortable and not crammed. So my knees didn’t bang into the seat of the next person nor did they hug my chest. I managed to catch a nice movie which I have been meaning to watch but never had the time. Any guesses? It’s an Oscar-winning film. If you’re done guessing, then scroll to see if you were right.
La la land! Yes! I had seen a few initial parts of the film but this time I saw the whole movie. I don’t know if it was edited for family viewing. Either ways, it was a nice film. But after all the hype around it, somehow I wasn’t too impressed. I guess I am a killer for happy endings, a more La La Landish reality than the actual ending seen in the film.

Anyway, back to Singapore. We landed well before time. As we were about to hit the runway we could spot the ships and streamliners cruising their way on the sea.  It was a different sight since most landings have a view of crowded cities.

After landing, we managed to finish procedures and collect our luggage in time. Fortunately, no suitcases were missing.

Our hosts were on time too since they kept a watch on the arrival timings. A blessing, indeed.

Singapore, like many of you have heard, is a clean place. Spotless, green and well-kept. A rather artificial air surrounds it. Perhaps because the wilderness is less and roads have been neatly carved to have organised pockets of greenery. The houses looked like meticulously crafted toy homes. Tall, multi-storeyed buildings with symmetrical windows, pastel hues and large gates. Many big companies and gated communities dotted our path.

We reached our home for the next fortnight. A home with a magnificent view and almost every thinkable facility from an eating space to a supermarket and a sports centre. We played a game of TT for a while. It was good fun.

We indulged a hot cup of tea made by our host, G. For dinner, we had rotis, kurma, fried curry and dal. We sat around chatting with family and reminiscing childhood days. It was nice to see everyone catch up and learn about each other. So much love and warmth. It was a happy start. (Touches wood).

We also made our itinerary for the next day. Well, it is still a bit fuzzy aince we don’t know when we will wake up.

Until then, have a good night sleep folks. Look out for my updates tomorrow!

PS: Things to keep in mind:-

The weather here seems to swotch between pleasant and sultry. If you’re traveling in march, you could carry more cotton clothes.

Tap water is drinkable! Try it when you’re here. 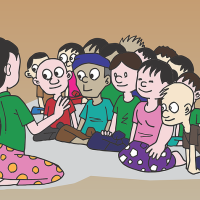